I think this is more of a BookTube thing, but I thought I would post my answers here as well!

All of the books I mention here can be found and purchased on my storefront.

Brooklynnaire by Sarina Bowen took me completely by surprise. I wasn’t expecting to become obsessed with this book, but here we are. It is part of the Brooklyn Bruisers series, but it can be read as a standalone. Our heroine is the former assistant to a socially awkward, but brilliant owner of a tech company (think Apple) and hockey team. They had a very close working relationship until he moved her to Brooklyn to manage the hockey team. I loved this so much because the hero is adorably awkward, but also super smart and the heroine has absolutely no idea that he has been in love with her this entire time. Like, she can’t even fathom it. It was just so swoony and there were so many moments that gave me so many butterflies. This is how I love to feel while I read a romance.

Fall Back Skyward by Autumn Grey is another one that surprised me. I read this because my daughter picked it out for me and it’s a book that I got at Shameless Book Con from Autumn last year. I immediately fell in love with this book and the way this story was told, both in present day and in flashbacks. It’s an emotional contemporary second-chance romance between a girl who moves in next door to these two brothers who both end up caring deeply about her. The hero is deaf and his brother is much more of your typical good-looking, talented, charismatic, nice guy, but she is much more drawn to his brother who is a bit darker and quieter. This had the epic love story that contemporary romances rarely have.
2. Best sequel you’ve read so far in 2020.
This is actually really easy.

Undercover Bromance (The Bromance Book Club #2) by Lyssa Kaye Adams. I loved The Bromance Book Club so much, but this one is my favorite so far. Mostly because it was so freaking funny and swoony. I adore Mack, the hero, so much, but I’ll talk more about that later. A lot of people didn’t like Liv, the heroine, but I loved her snark and attitude! This continues the story about The Bromance Book Club, a book club that Mack started because he relys heavily on romance novels to give him relationship advice. He’s very popular with women, however, he hasn’t been able to find a long-term relationship despite following all the romance novel rules.
3. New release you haven’t read yet, but want to.

*Jo & Laurie by Margaret Stohl and Melissa de la Cruz
I flipped out when I saw that this book was a thing because Jo and Laurie from Little Women is a ship I will so go down with. I’ve loved them together since I first watched the movie that came out in 1949 as a kid. This is basically fanfiction retelling the story, but with Jo and Laurie ending up together.
4. Most anticipated release for the second half of the year.
I did this tag on my channel before Mariana Zapata announced her latest book, but I had said whatever book she comes out with this year is my most anticipated. Well, we have a title and a cover now! 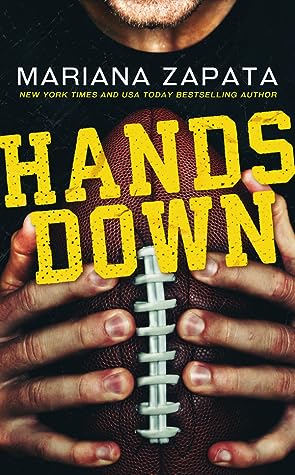 *Hands Down by Mariana Zapata
This is about one of my favorite characters from The Wall of Winnipeg and me, Zac!!
5. Biggest disappointment.

I honestly don’t really have one that stands out, but if I had to choose it’d be: Serpent & Dove by Shelby Mahurin. I was expecting an epic romance, but it was just ok. It certainly wasn’t bad, but it wasn’t epic as I would expect a forbidden romance in a YA fantasy would be.
6. Biggest surprise.

I’ve mentioned two books that surprised me this year already, but for this specific question, I’m going to go with *Can’t Escape Love (Reluctant Royals #2.6) by Alyssa Cole.
I really didn’t have any expectations going into this one. I thought it would be a cute, quick read, but I didn’t love the first book in this series because I don’t love the royalty trope. This book had nothing to do with royalty, despite mentioning some of the characters from the other books briefly, and it had everything to do with a smart, geeky couple falling in love and having the best meetcute ever.
7. Favourite new author. (Debut or new to you)
*Autumn Grey
Like I said earlier, my daughter picked her book Fall Back Skyward for me to read and I fell in love. Since then I’ve read Desolate and really enjoyed that as well. She doesn’t have a huge backlist yet, so I’m pacing myself reading her books, but I already know she’s going to be a favorite. Her writing is beautiful, I love her story-telling, she creates such swoony and realistic relationships with tons of chemistry, and she’s an awesome human on top of it all.
8. Newest fictional crush.
Mack from Undercover Bromance by Lyssa Kaye Adams
There are a lot of heroes I’ve been loving this year, but I think Mack wins because he’s such a conundrum. He’s super successful, seemingly alpha guy, but he’s also self-depricating and a big softy. He loves reading romance novels and he is a feminist.
9. Newest favourite character.
*Regina Hobbs from Can’t Escape Love by Talia Hibbert
Regina is such a badass. She’s hardworking and super smart and geeky. She runs a very successful website pretty much on her own. This is one of those situations where, though I loved the hero as well, the heroine was my favorite.
10. Book that made you cry.

I legit got teared up a few times reading *Hamilton: The Revolution by Lin-Manuel Miranda because, though it was written back in 2016, reading it now and how relevant it is – how filled with hope it is – just really hit home for me.
11. Book that made you happy.

OMG, so many! I rarely read books that make me feel any other way. But I had a big smile on my face while I read The House in the Cerulean Sea by TJ Klune. It’s so full of magic and whimsy and sweetness. I loved it.
12. Most beautiful book you’ve bought so far this year (or received)

I just bought the collectors edition of Anna and the French Kiss. I haven’t received it yet, but it’s absolutely stunning. Buy this version here.
13. What books do you need to read by the end of the year?
All the books. Seriously. So many. I want to continue reading at least one Brittainy C Cherry book per month. This month I’m going to read Loving Mr. Daniels. I want to read the rest of Autumn Grey’s back list. I’m definitely going to read Mariana Zapata’s new release.