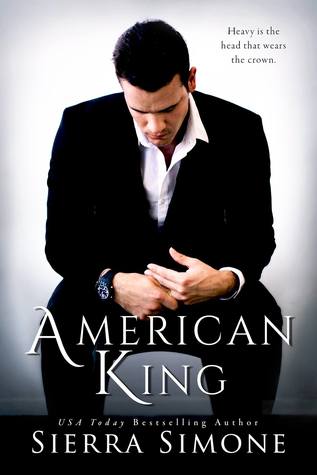 Synopsis:
They say that every tragic hero has a fatal flaw, a secret sin, a tiny stitch sewn into his future since birth. And here I am. My sins are no longer secret. My flaws have never been more fatal. And I’ve never been closer to tragedy than I am now.

I am a man who loves, a man whose love demands much in return. I am a king, a king who was foolish enough to build a kingdom on the bones of the past. I am a husband and a lover and a soldier and a father and a president.
And I will survive this.

I started reading this series a couple of years ago and have re-read the first book in it, American Queen, a few times.

As much as I love Embry’s character, I didn’t love his book, American Prince, quite as much. I think part of it was being inside of his and Ash’s heads. I can’t quite pinpoint why, but I think it took the mystery away from Ash just a little bit.

So, needless to say, I was hesitant going into this book. I knew the majority of it would be from Ash’s perspective, and I didn’t want to facade to be destroyed even more.

However, I was pleasantly surprised.

I knew this book was going to be emotional, but I don’t think I was quite prepared for what was going to happen. Like… at all.

The touch of paranormalcy in this book surprised me the most, which I feel like I should’ve seen coming. After all, this is considered The New Camelot Trilogy and there is a character named Merlin. There was even a hint in the first book. Yet, I was still a little… I don’t think confused is the correct word… I guess, taken aback by it all.

As for the ending… I didn’t hate it. Like… at all. I think it was a really good ending to this quite epic series.

This isn’t my favorite Sierra Simone book, but it is still really good.