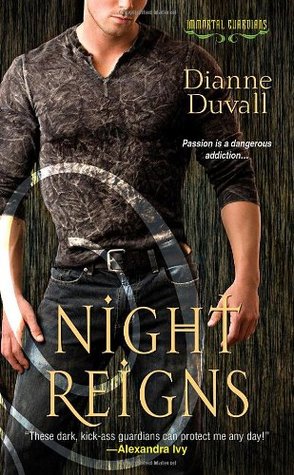 Synopsis:
Ami isn’t much for trusting strangers. She has a hard time trusting anyone. But she’s no coward, and she’s no pushover in the protection department either. So when she comes across a mysterious warrior taking on eight deranged vampires on his own, she doesn’t hesitate to save his bacon. Of course, that was before she realized what one little rescue would get her into . . .

Marcus Grayden has been an immortal protector of humanity for eight hundred years, and at the moment he’s not interested in backup. From the moment Ami arrives in his life, he can’t deny that she’s strong, smart, and extremely skilled at watching his back. But she’s also destroying his protective solitude and stirring desires he can’t bear to awaken. After all, whatever her secrets — how can she defeat death itself?

The Immortal Guardians series was such a great way to re-introduce myself to the paranormal romance world after living in the contemporary world for so long.

This book was not what I was expecting after the first, mainly because I anticipated many things that didn’t actually come to fruition, for better or worse.

I started this book out with a bit of a negative bias because I really, really wanted Ami to be with Seth. I thought for sure after reading the first book that her and Seth would have an epic love story, but it would appear I misinterpreted their relationship in the first book.

Don’t get me wrong, I love Marcus. In fact, I love most of our heroes (that I know of them, anyway) in this series. And I did really enjoy Ami and Marcus’s story, but even after finishing this book, I was still half-wishing she would’ve ended up with Seth.

I also expected Ami to be very different than she ended up, but I didn’t hate her character at all.

In any case, I didn’t immediately jump into reading the next book in this series which tells me that this series is something I’ll certainly be coming back to in the future, but these novels stood well enough on their own for me.