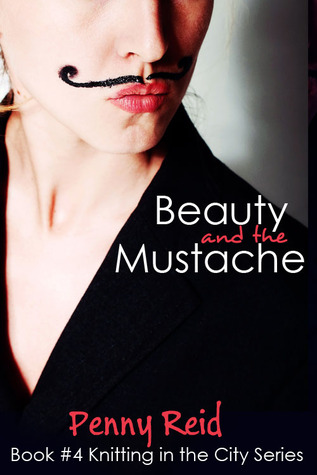 Synopsis:
There are three things you need to know about Ashley Winston: 1) She has six brothers and they all have beards, 2) She is a reader, and 3) She knows how to knit.

This was my least favorite book in the Knitting in the City series so far, but I still really enjoyed this read.

If I gave half stars, this would probably be a 3.5, but this is Penny Reid and she gets a jump to 4 stars instead of rounding down to 3.

I think maybe the reason why I didn’t like this book could’ve been the audiobook reader. I found her voice somewhat annoying and I think maybe it made me a little annoyed with our character.

I’m probably going to talk a lot about the things I didn’t like in this novel mostly because the things I did like are all the things I love with Penny Reid’s books anyway. The wit, the banter, the swoon-worthiness… it was all there, but along with all those things I’ve come to expect and appreciate from Penny, were things that I didn’t so much like in this book.

1. The “therefores” and “futhermores” started getting on my nerves… it truly could’ve been the way the narrator was saying it, but honestly, I’m not a huge fan of these words in contemporary novels because it makes them sound like essays.

2. I straight up did not like Drew for more than half of the book. He was really mean with no real reason that I could figure out, even when we got to know them more.

3. The conversation between Ashley and her friends when they came to visit her as her mom was dying (the one right before they left where they were trying to convince her to be with Drew) made me uncomfortable. The first time they meet Drew he was being really mean to their friend and yet they were trying to talk her into screwing him just because he was cute? If I saw my good friend being talked to like that by any guy (no matter what he looks like) I would have lost my mind (I’m extremely overprotective of my friends).

4. I wanted more from the storyline with Ashley’s mother and the brothers’ interactions with her and just the family dynamic in general as they went through this tragedy.

Anyway, things really looked up toward the end and I definitely swooned quite a bit, but it definitely took a while this time around!

5 thoughts on “Beauty and the Mustache (Knitting in the City, #4; Winston Brothers, #0.5) by Penny Reid”