These are all books that I own and want to read this month! Titles link to Goodreads. 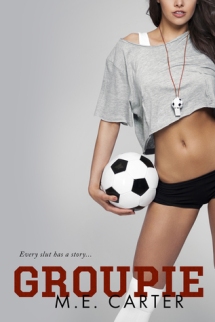 Beauty and the Mustache (Knitting in the City #4, Winston Brothers #.5) by Penny Reid

There are three things you need to know about Ashley Winston: 1) She has six brothers and they all have beards, 2) She is a reader, and 3) She knows how to knit.

Groupie (Texas Mutiny #2) by ME Carter

Groupie
/ˈɡro͞opē/
a person, especially a young woman, who regularly follows a celebrity in the hope of meeting or getting to know them.

Whore. Slut. Cleat Chaser. I’m used to the names so they don’t bother me. These are my boys. My friends. So what if I like to have dirty sex with them? My body is no one’s business but mine.

Why is Rowen Flanigan making me re-think how I live my life? Making me question my choices? He’s only a rookie.

rook·ie
/ˈro͝okē/
a member of an athletic team in his first full season in that sport.

Player. Son of a legend. Rookie.
Sure, I’d heard the stories of the groupies before. Who hasn’t? I’ve just been more sheltered than my teammates. So what? I didn’t expect her to be smart. Witty. Kind. She brings me to my knees in every way – except one.

That part? I’m saving until the time is right.

So how in the hell did I end up falling for a Groupie like Tiffany? And how in the hell is this going to work when everyone at my job has had a piece of the one thing I haven’t?

Getting Schooled (Getting Some #1) by Emma Chase

Head of the class…

Garrett Daniels has this whole life thing figured out.

The cocky, charismatic former high school star quarterback is an idolized football coach and “cool” teacher in the hometown where he’s not just a golden boy—he’s platinum. He has good friends, a great house on the lake, and the best damn sidekick a man could ask for: Snoopy, the albino beagle.

And knocks him right on his tight end zone.

Callie has a pretty sweet life herself…on the other side of the country. But circumstances—that she’d prefer to never speak of again—have brought her back home, helping out her parents and substitute teaching at her old high school.

When Garrett offers to show his former high school sweetheart the secrets of his winning teacher ways, Callie jumps at the chance—and then has to stop herself from jumping him.

Good friends are all they can ever be.

The Fortunes of Indigo Skye by Deb Caletti

I suddenly see where I’m standing, and that’s at the edge of change – really, really big change.
Eighteen-year-old Indigo Skye feels like she has it all – a waitress job she loves, an adorable refrigerator-delivery-guy boyfriend, and a home life that’s slightly crazed but rich in love. Until a mysterious man at the restaurant leaves her a 2.5 million-dollar tip, and her life as she knew it is transformed.

At first its amazing: a hot new car, enormous flat-screen TV, and presents for everyone she cares about. She laughs off the warnings that money changes people, that they come to rely on what they have instead of who they are. Because it won’t happen…not to her. Or will it? What do you do when you can buy anything your heart desires — but what your heart desires can’t be bought?

This is the story of a girl who gets rich, gets lost, and ultimately finds her way back – if not to where she started, then to where she can start again.