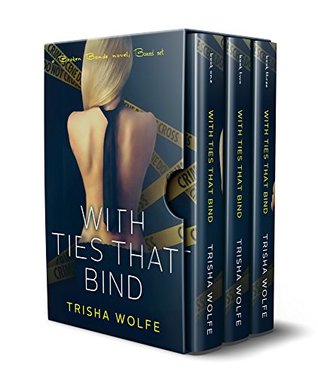 Overall Rating: 4 Stars
Title: With Ties that Bind Series
Author: Trisha Wolfe
Format: eBook purchased from AmazonSynopsis:
Detective Ethan Quinn has questions. The Arlington Slasher case is closed, the UNSUB no longer a threat—but Quinn can’t quiet the suspicion he harbors toward his partner and the young, attractive ME. Not only does he loathe his uncertainty, he’s torn between doing his job and protecting his team.

Burying himself in cases no longer works. He’s restless. On edge. And tired of fighting his compulsions. Quinn has always viewed the law in black and white. Only now his world is swirling with a murky gray that threatens to devour him.

When lead medical examiner Avery Johnson careens toward a dangerous path, she pulls the unwitting detective into a dark web of deception and lust, triggered by a spree of recent killings.

Is this new player linked to the Bathory murders, or is it another copycat?

Time almost took Avery from him once before. As the clock ticks, Quinn will stop at nothing to protect her, refusing to let Avery become a victim again. Against his uncompromising logic, Quinn can’t deny his feelings. Avery forces him to acknowledge his darker desires, tempting his control—which weakens with every second he spends with the feisty ME as they hunt down the perpetrator threatening to tear them apart.

Quinn and Avery are no Colton and Sadie, but I enjoyed diving back into the world of Broken Bonds.

This series, like With Visions of Red, works as a series or as a completed book. The physical and ebooks give you little breaks if the darkness is a little too much for you all in one sitting.

It isn’t for me. Not at all. Give me all of Trisha Wolfe’s darkness.

In fact, Avery and Quinn were almost a little too “light” for me (which isn’t saying much, trust me) in comparison to Sadie/Colton and London/Grayson (Darkly, Madly Duet).

One of the best things that TW does is dig deeply into the dark minds and Avery and Quinn are much more “normal” than the previous characters of hers that I read.

By the second book, I started losing interest a bit, but by the third book, my interest spiked again. I loved the ending of this series, particularly how London was briefly mentioned. It made me smile hearing her name. I love knowing what I know now about Sadie after having glimpsed her in Born, Darkly.

I pretty much have loved all the female characters in TW’s books that I’ve read, and that, unfortunately, is pretty rare for me.

The female characters here are strong and fierce without being obnoxious. They are subtle in their dark badassery and I appreciate that.

Seeing Sadie and Colton from Avery and Quinn’s POVs actually made me love them more. I love seeing how others view Sadie after being in her head in With Visions of Red. It’s obvious that she doesn’t realize just how intimidating she is.

Don’t get me wrong, I loved Avery, too. I loved Avery in the first book. But Sadie is certainly a much more interesting character.

Quinn isn’t necessarily my cup of tea, he’s a little too much of a stereotype for me, but I really liked him with Avery.

Overall, these books are worth reading, especially if you were a fan of the Darkly, Madly duet and the With Visions of Red trilogy.

Most of these stars came from one amazing scene!

I need all of Trisha’s book on my shelves!

Like I said, Quinn isn’t necessarily for me, but he’s definitely not a bad guy!