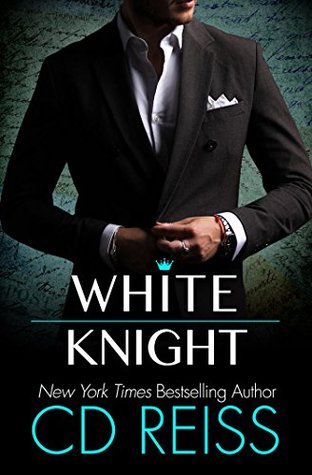 Synopsis:
Catherine Barrington is a rich girl. Chris Cartwright is a poor boy.
He left her to make something of himself. A man she could be proud of. A man she could bring home to her parents. A man she could marry.
On the trading floor he became the man he knew he could be. Now, it’s time to return.
Rich girl.
Poor boy.
She didn’t care about his money, but he didn’t believe her. Soon after he left, all the money was gone.
Her life is hell.
Now he’s back, and he’s different. Pristine. Gorgeous. Rich.
Rich boy.
Poor girl.
Money was never the barrier, until now.
—-
White Knight is a standalone in the same world as King of Code, with it’s own beginning, middle, and end. You don’t need to read anything else to read White Knight.

I loved King of Code… I’m obsessed with White Knight.

CD Reiss’s bio on Goodreads says that she’s known as the Shakespeare of Smut, and I couldn’t agree more.

In all honesty, I actually don’t think that her books are all that smutty, but maybe that’s because I’ve read a lot of steamy romance novels in my time.

I devoured White Knight all in one sitting and I was absolutely not expecting to!

While I was excited to read it after reading King of Code, I figured it’d be one of those books I’d eventually get to, like, 2 years after adding it to my TBR. (As is the unfortunate norm.) Especially since it is an eBook and I rarely have time to actually sit down and read.

The day before, however, my husband and I went to the beach and I decided to start the book. Little did I know it would consume me and I’d obsessively read it to the very last page.

Fair warning to anyone who reads this book on their Kindle and has the percentage read feature turned on… this book has a few chapters from two of her other books at the end, so even though it says you’re only halfway through, you’re actually almost finished at that point.

That threw me off so bad because I kept thinking to myself, “Oh my goodness, this HEA is wrapping up, but I’m only halfway through! Something horrible is going to happen!”

Alas, it did not.

I think the thing I loved the most about this book, aside from the gorgeous prose, was how intense the sparks were between Catherine and Chris. Their connection was one of those rare instalove instances that I was wholly invested in.

CD spun the magic of young first love like the magician she is. It felt like the whirlwind it was meant to be. I was completely wrapped up in their love story and was just as hesitant and hopeful as Catherine was when they reunited years later.

This was such a gorgeous romance with the perfect amount of steam.

This was one of those books that I crave because of how good it makes me feel. The butterflies were so intense, I had to set the Kindle down and breathe through a few of them!

I already have, actually. I ended up buying this on audio and re-listened to it!

CD deserves her own spot on my shelf.

Chris isn’t perfect, but the mistakes he made were in the name of love, so I couldn’t really blame him.

New reading blog up on my channel! I reread the Shadow and Bone series (along with a few other books), unhauled some books, and tried gel nails at home for the first time thanks to @nailaddict_la! (Use code BREE for 55% off!)
Call Me Maybe - Cara Bastone⁣
Truth or Dare - Danielle Allen⁣
(Another Ronan photobomb! He's 3mos old now.)⁣
Ronan and his big puppy belly would like you to know that my latest TeaChat is up on my channel. Let's chat about February!
(Ronan was very disruptive to today's photoshoot LOL)