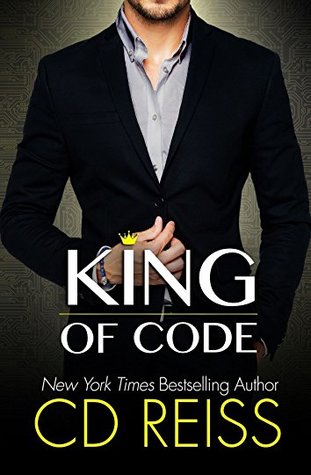 Synopsis:
Taylor Harden is a tech hero on the edge of fame and untold wealth, until a hacker freezes his company and holds it hostage.

Harper doesn’t want much from Taylor.

All he has to do to get his company back is teach her how to please a man. Step by step, and for every step she’ll unlock a piece of his system.

Using your mouth to…

How far is this crazy woman going to go?

They hate each other. They can’t keep away from each other. They’re decoding each other with every step, until all Harper’s secrets are revealed, and Taylor risks losing his heart as well as his company.

Why have I waited so long to read a book by CD Reiss… Particularly this book?

I can’t tell you how ecstatic I am over finding so many incredible authors this year. Not just decent authors, but Autobuy Authors.

CD Reiss may just be one of them.

I’m going to give it a few more books to see, but so far, she’s impressed me.

She’s an incredible writer and storyteller. I was in awe of the amount of research she must’ve done to write this book effectively.

While I’m no hacker, I do know a decent amount of code, and I was getting all of her references. I was particularly in love with Taylor’s letter that he writes all in code to Harper.

Speaking of Harper and Taylor… they were both such unique, distinct characters.

Taylor is one of my favorites because his flaws and traits weren’t overly exaggerated for the sake of a bold personality. His growth as a person throughout the book was slow-moving but significant (and I mean that in the best way.)

He gradually realized just how misogynistic he was being as he realized that, yes, in fact, a woman can be a brilliant coder and, no, just because he can’t keep it in his pants doesn’t mean that’s a good reason to avoid hiring women.

Harper was straight up crazy and brilliant and seemed to have some social issues and I loved every second of it. She made me uncomfortable a few times, but I wasn’t mad about it. It felt right for her character.

I am so excited to read more books by CD Reiss!

NOTE: This book isn’t technically part of a series, however, a few of the characters have their own novels that tie into this novel. Prince Charming follows Keaton and White Knight is Catherine’s story.

This is the order I suggest reading them in:
1. King of Code
2. White Knight
3. Prince Charming

To be honest, the last two can be interchangeable, but I think King of Code makes sense to read first.

Could I be any more in love with Christian Fox? I don’t think so. He has the most gorgeous voice in the world. I could listen to him read the dictionary and be happy. I also like the subtle “effects” in this audiobook when it came to the codes that would otherwise be boring.

Lots of butterflies in this one!