My In Love & Words Teen Reader, Kayla, and I decided to have a little spontaneous Q&A via text.

We each came up with two questions (at least one of them had to be bookish) and we both had to answer all the questions.

Here’s how the conversation went:

Bree: That’s such a good question lol
I actually have an answer.

Colby is a firefighter and after reading all the books about his brothers, I was really excited to “meet” him in his book.

Both of his brothers are very outgoing and somewhat over the top, but Colby was the more reserved, quiet one. When I finally read his book, I was excited to see what he was like and I was a little disappointed that he wasn’t as low key as I expected him to be. He was a lot like his brothers, and while I love his brothers, I really wanted him to be a lot different than them. So if I could tweak him, I’d make him more pensive and introspective, more introverted.

Kayla: The Juliet Spell
And I was so dissolved because he was only a 2/5 star book boyfriend and it was mostly because he was with another girl most of the book

Bree: So, how would you change him?

Bree: That’s frustrating~
Was there a lot of miscommunication between him and the girl?

Kayla: I know I was like, “You could be so good and you have a fun accent that was on a tiny bit difficult to read.”
Not really miscommunication it was just that since we was from another time everything was new to him and he was just so distracted by other things

Bree: Ohhhh ok I get it
So he time-traveled?
That’s kind of cool.

Kayla: But then again the girl probs could have made it more obvious
Not really time traveled more like accidentally transported
Complicated but it will make sense once you read it

Bree: Yep. My turn.
I changed my question.

Bree: If you were to write fan fiction right now, who would you write it about and what would happen?

Bree: Oh, eff my life, I just realized I need to answer this question, too
lol

Kayla: HAHAHA YAS
🤔 💭
Ok question for your question
Do you want it on like the realistic side or like fantasy magic kind of thing

Kayla: Omg that makes it so hard bc I have two people I could think of and I’m going to go with the new magic unrealistic way bc I think it might be more fun
I would choose Shawn Mendes and this is how it would go:

Kayla: Omg that was so extra I had to cut it off somewhere
Half way through I realized you probs just wanted a summary but I was like well it’s too late now. You know when I start to write there is no stopping me.
OMG I JUST SCROLLED AND SAW HOW LONG IT WAS.

Kayla: Omg I didn’t even mean it 😂😂😂😂laughing so hard right now. That took me 20mins
Your turn!😂

Bree: LOL, so mine’s going to be an actual summary.

Kayla: You really should have clarified

Bree: The damage is done now there is no going back.
There is this ridiculously gorgeous male model who has a ton of tattoos and piercings that I’m kind of in love with. I’d choose him and obviously he would be the bad boy with a big heart situation.

Kayla: Ok and what would happen

Bree: I’m thinking the main character would get trapped somewhere with him during a hurricane and they’d stay up all night until it passed talking. And she’d be freaking out and he’d be calming her down the whole time.

Kayla: Ok but aren’t you supposed to be the girl

Kayla: Welp
If I would have known

Bree: Let me show you a picture. He has super fun hair, too. 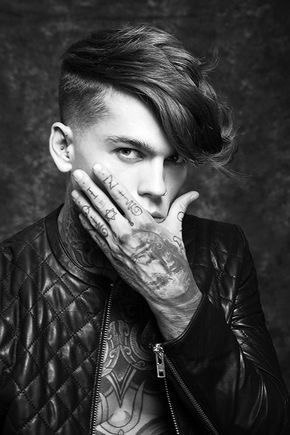 That’s him.
I’m living for his hair.

Kayla: Ok being an author, what is one book you wish you wrote that you have read.

Bree: The Sky is Everywhere by Jandy Nelson. Hands down.
It’s the most gorgeously written book I’ve ever read.
Let me see if I can find a couple quotes
So, the guy in this book is a musician and this is how she describes how he plays:
“When he plays
all the flowers swap colors
and years and decades and centuries
of rain pour back into the sky”

Kayla: Ouuuu good quote
Mine would be either Twilight just because like everyone either loves it or hates it and to get those kinds of feedback from people to know that you have written a book with a lot of meaning that gets to people or Caraval bc it’s so magical
And also Twilight has a movie and people take sides of either Jacob or Edward and everyone basically has a team like you can’t just not be on Team Jacob or Team Edward

Bree: Ahhh good choice. I like your reason for Twilight.

Bree: “Remember how it was when we kissed? Armfuls and armfuls of light thrown right at us. A rope dropping down from the sky. How can the word love and the word life even fit in the mouth?”

Kayla: Oh yeah it does have good quotes

Bree: “And then he smiles, and in all the places around the globe where it’s night, day breaks.”
Instead of just saying, “he has a beautiful smile.”

Kayla: Is it my turn?

Kayla: Oh yes love this one
In no specific order:
1. 8th grade dance
2. The day that was spent with you and Avery
2. Laughing so hard that I couldn’t breathe or talk and then having to pee afterward
Aww wait I forgot about the time when it was you and me and we had that day
HA I just realized I did 2 twice

Bree: LOL! Count much??!
The sleepover with Avery is totally on my list.

Kayla: 🤣😉
It was the best thing ever that sleepover

Bree: It was pretty great
My wedding is also on my list cuz it was so much fun.
And then my first experience at a Book Con.

Kayla: Omg ok wait I’m changing my answers for the memory one:
1. Sleepover with Avery and you
2. Wedding for my cousin
3. The day in elementary school where I finally got across the monkey bars and there was an entire group of kids running and following me to tell the coaches I finally did it bc it took me like all year.

If you’d like to see more of Kayla’s posts, you can find them here.

Your turn to answer our questions!

1. Pick your least favorite Book Boyfriend and tweak him to make him perfect.
2. If you were to write fan fiction right now, who would you write it about and what would happen?
3. What is one book you wish you wrote that you have read?
4. What are three of your all-time favorite memories