Brace yourselves, this is going to be a long one…

Also, reader beware. This post is wrought with spoilers. Do not continue if you haven’t read this book.

People screamed, falling back, a few vanishing outright as darkness erupted. I found Rhysand straightening the lapels of his black jacket. “Hello, Feyre darling,” he purred.

“What a pretty little wedding,” Rhysand said, stuffing his hands into his pockets.

“What better time to take you here? Maybe Tamlin didn’t notice you were about to reject him in front of his entire court – maybe you can now simply blame it on me.”

“I want you to say thank you, first of all. Then I want you to take off that hideous dress. You look…” His mouth cut a cruel line. “You look exactly like the doe-eyed damsel he and that simpering priestess want you to be.”

His gaze raked over me again, as if he could see beneath the peach fabric, through the skin, to the shredded soul beneath.

“You’re a real bastard, you now that?”
Rhys huffed a laugh. “I’ve been called worse. In fact, I think you’ve called me worse.” 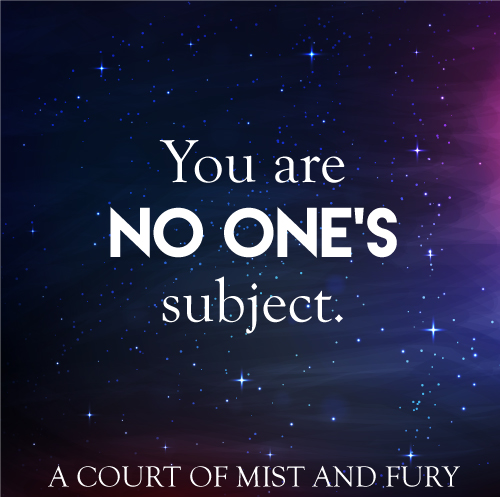 “I’ll say this once – and only once. You can be a pawn, be someone’s reward, and spend the rest of your immortal life bowing and scraping and pretending you’re less than him, than Ianthe, than any of us. If you want to pick that road, then fine. A shame, but it’s your choice. But I know you – more than you realize, I think – and I don’t believe for one damn minute that you’re remotely fine with being a pretty trophy for someone who sat on his ass for nearly fifty years then sat on his ass while you were shredded apart.”

“Feyre,” Rhys’s eyes lingered, taking in every detail. “Are you running low on food here?”

Tamlin was in Rhysand’s face in an instant, and I flinched. “Get out.” He pointed toward the staircase. “She’ll come to you when she’s ready.” Rhysand just brushed an invisible fleck of dust off Tamlin’s sleeve.

“You should really have your wards inspected. Cauldron knows what other sort of riffraff might stroll in here as easily as I did.”

“I have so many things to deal with that I’m sometimes tempted to unleash my power across the world and wipe the board clean. Just to buy me some damned peace. But I always make time for you.”

“Let me help you,” Rhys said. “We went through enough Under the Mountain-” I flinched. “She wins,”Rhysand breathed. “That bitch wins if you let yourself fall apart.”

“Any time you need someone to play with,” Rhys said, pushing the plate toward me on a star-flecked wind, “whether it’s during our marvelous week together or otherwise, you let me know.”

Rhys just said to me, “Fight it.” And then he was gone.

“Consider yourselves very, very lucky that your High Lord was not there when we arrived. Your guards will have one hell of a headache when they wake up, but they’re alive. Be grateful.”

“Did you think his shield would keep us from you? Rhys shattered it with half a thought.”

“My mother didn’t want me to rely on my power,” Rhysand said. “She knew from the moment she conceived me that I’d be hunted my entire life. Where one strength failed, she wanted others to save me.”

“I love my people and my family. Do not think I wouldn’t become a monster to keep them protected.” 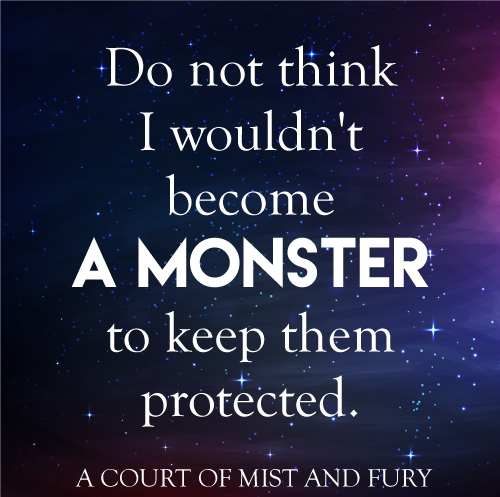 “It’s a shame that the other in Prythian don’t know. A shame that you let them think the worst.”
“As long as the people who matter most know the truth, I don’t care about the rest.”

Bow, he’d once ordered Tamlin. And now here he was, on his knees before me. His eyes glinted as if he remembered it, too.

“So, I’m your huntress and thief?”
“You are my salvation, Feyre.”

“Did you enjoy the sight of me kneeling before you?”
“Isn’t that all you males are good for, anyway?”
His answering smile evoked silken sheets and jasmine-scented breezes at midnight.

“There are good days and hard days for me – even now. Don’t let the hard days win.” 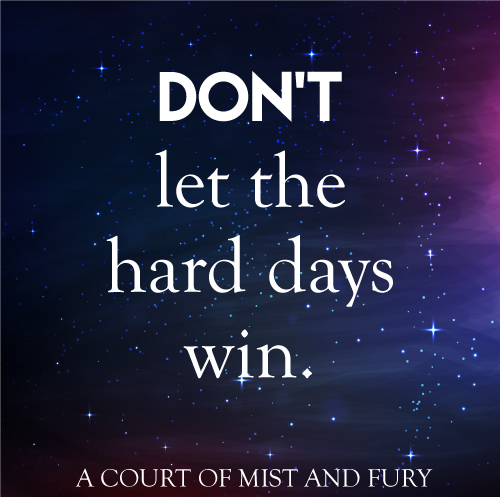 “I can eat, drink, fuck, and fight just as well as I did before. Better, even.”

I wondered if Rhys’s spymaster often got his information through stone-cold manners as much as stealth and shadows.

There was an icy rage in Azriel that I have never been able to thaw.

“You sent that music to my cell. Why?”
Rhysand’s voice was hoarse. “Because you were breaking. And I couldn’t find another way to save you.”

I’d learn to love it, I realized. The flying.

“He locked you up because he knew – the bastard knew what a treasure you are. That you are worth more than land or gold or jewels. He knew, and wanted to keep you all to himself.”

“The issue isn’t whether he loved you, it’s how much. Too much. Love can be a poison.” 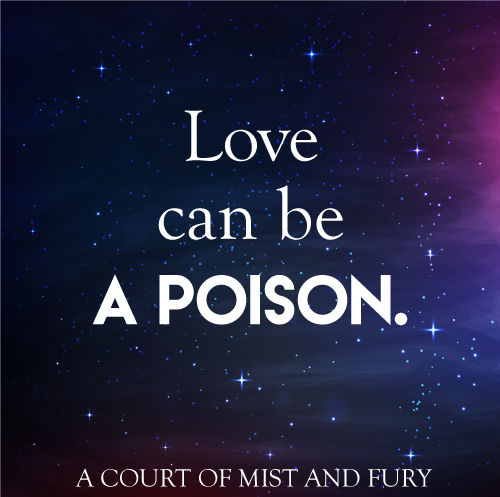 “I’m thinking it would be very easy to love you. And even easier to call you my friend.”
“I would not object to either.”

“He will never have to worry about someone walking away because the threat against their life, their children’s lives, will always be there. So, yes, I was jealous of him – because it will always be easy for him. And he will never know what it is like to look up at the night sky and wish.”

The Court of Dreams.
The people who knew that there was a price, and one worth paying for that dream The bastard-born warriors, the Illyrian half-breed, the monster trapped in a beautiful body, the dreamer born into a court of nightmares… And the Huntress with an artist’s soul.

“To the people who look at the stars and wish, Rhys.”
“To the starts who listen – and the dreams that are answered.” 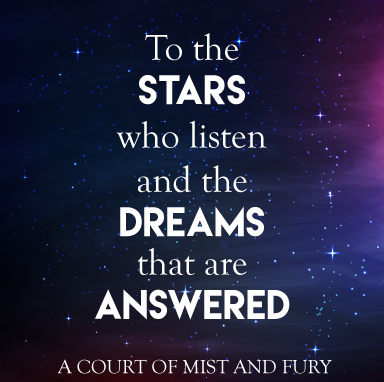 “I made a mistake.”
“It’s not the end of the world if you do that every now and then.”

“Many atrocities have been done in the names of the greater good.”

“You only started to look at me like I’m not a monster, and I can’t stomach the idea of anything you see tomorrow, beneath that mountain, putting you back into that place where I found you.”

“Amren and Mor told me that the span of an Illyrian male’s wings says a lot about the size of … other parts.”
“Did they now?”
“They also said Azriel’s wings are the biggest.”
“When we return home, let’s get out the measuring stick, shall we?”

I blindly reached again…and dared to run a fingertip along some inner edge. Rhysand shuddered, a soft groan slipping past my ear. “That,” he said tightly, “is very sensitive.”

“I will kill anyone who harms you,” Rhys snarled. “I will kill them and take a damn long time doing it.” He panted. “Go ahead. Hate me – despise me for it.”

“I am not him,” Rhys breathed. “I will never be him, act like him. He locked you up and let you wither, and die.”

“You don’t think I know how the stories get written – how this story will be written?” Rhys put his hands on his chest, his face more open, more anguished than I’d seen it. “I am the dark lord who stole away the bride of spring. I am a demon, and a nightmare, and I will meet a bad end. He is the golden prince – the hero who will get to keep you as his reward for not dying of stupidity and arrogance.”

“I forgot to tell him that the villain is usually the person who locks up the maiden and throws away the key. He was the one who let me out.”

“You look like a woman again.”
“You really know how to compliment females, cousin.”

I did not mind stepping out of the shadows, did not mind even being in the shadows to begin with, so long as he was with me. My friend through so many dangers – who had fought for me when no one else would, even myself.

“If any of you lay a hand on her, you will lose that hand. And then you lose your head. And once Feyre is done killing you, then I’ll grind your bones to dust.”

Let them wonder what I could do if provoked.

“Go back to your lands before I send your heads as a reminder to my old friend about what happens when Spring Court flunkies set foot in my territory.”

“Careful, Lucien. Or Feyre darling will send you back in pieces, too.”

“When you spend so long trapped in the darkness, Lucien, you find that the darkness begins to stare back.”

“Tell Tamlin if he sends anyone else into these lands, I will hunt each and every one of you down. And I will demonstrate exactly what the darkness taught me.”

“Did you think I would go with him?”
“I heard every word between you. I knew you could take care of yourself, and yet…And yet I found myself deciding that if you took his hand, I would find a way to live with it. It would be your choice.”
“And if he grabbed me?”
“Then I would have torn apart the world to get you back.”

“I’m thinking that I can’t stop thinking about you. And that it’s been that way for a long while. Even before I left the Spring Court. And maybe that makes me a traitorous, lying piece of trash, but -”
“It doesn’t.”

“I’d wake up with your scent in my nose and it would haunt me all day, every step.”

“And then – then I learned your name. Hearing you say it … it was like an answer to a question I’d been asking myself for five hundred years.”

“I knew that you were my mate, and you were in love with another male, and had destroyed yourself to save him, and that… that I didn’t care. If you were going to die, I was going to die with you.”

“I’d endure every second of it over again so I could find you.”

His eyes were like the stars I’d painted once, long ago.

And so, Tamlin unwittingly let the High Lady of the Night Court into the heart of his territory.

What are your favorite quotes from this book?