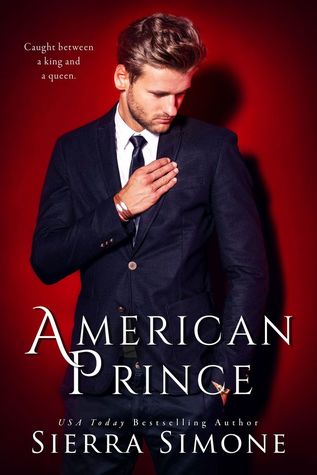 Synopsis:
I’ve been many things.

I’ve been a son and a stepbrother. An Army captain and a Vice President.

But only with Him am I a prince. His little prince.

Only with Maxen and Greer does my world make sense, only between them can I find peace from the demons that haunt me. But men like me aren’t made to be happy. We don’t deserve it. And I should have known a love as sharp as ours could cut both ways.

My name is Embry Moore and I serve at the pleasure of the President of the United States…for now.

This is the story of an American Prince.

WHY DIDN’T I LOVE THIS?

I just… I don’t understand. For some reason, this book just did not do it for me.

It had all the right ingredients for a great Sierra Simone book: beautiful writing, drama, lots of super steamy times… but for some reason those things didn’t add up to the great reads the rest of the books I’ve read by her have.

Many of things I was surprised didn’t bother me in Priest and American Queen bothered me in this book.

I think the biggest difference between American Queen (which I rated 5 stars and loved) and American Prince was that it made me dislike Ash quite a bit. Possibly it was because I felt disconnected from him since this book is told mostly in Embry’s point of view (and a little bit from Greer’s).

I’m not entirely sure, but Ash definitely lost a lot of his mystique for me in this second book… and in doing so, I didn’t get the intended buy-in for his relationship with Embry.

I did, however, fall in love with Embry all over again, but I wasn’t rooting for him and Ash at all. And since most of this story followed their relationship in the past and present, I found myself cringing more than swooning.

That being said, I’m interested in reading American King only because I hope this series redeems itself.

I love Stephanie Rose, her performance was perfect. Guy Locke is an OK narrator in this book. There are a couple things about his voice that grate on me after awhile, and I’m not a fan of his Ash voice.

I just wasn’t connecting with the characters so much in this book.

Unless I adore the last book as much as the first, I don’t see myself rereading this one.

I’ll probably need the whole series for my shelf in any case!

Despite not connecting with Ash in this book, I still really like him, but I loved Embry in this book just as much as I always have.