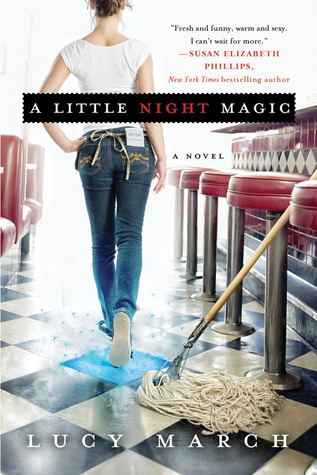 Synopsis:
Olivia Kiskey needs a change. She’s been working at the same Nodaway Falls, New York, waffle house since she was a teenager; not a lot of upward mobility there. She’s been in love with Tobias, the cook, for the last four years; he’s never made a move. Every Saturday night, she gathers with her three best friends—Peach, Millie, and Stacy—and drinks the same margaritas while listening to the same old stories.

Intent on shaking things up, she puts her house on the market, buys a one-way ticket to Europe, and announces her plans to her friends… but then she meets Davina Granville, a strange and mystical Southern woman who shows Olivia that there is more to her life than she ever dreamed.

As Liv’s latent magical powers come to the surface, she discovers that having an interesting life is maybe not all it’s cracked up to be. The dark side of someone else’s magic is taking over good people in town, and changing them into vessels of malevolence. Unwilling to cede her home to darkness, she battles the demons of her familial past and her magical present, with those she loves at her side… and in the cross fire.

Can the most important things in life—friendship, love, magic, and waffles—get her through the worst that the universe can throw at her?

I actually read this book several years ago, on a complete whim, and it has been on my favorites list ever since.

I’ve mentioned in previous posts that this is a highly underrated book in my opinion. And, having read it and listened to the audiobook several times (including very recently) I stand by that claim.

I didn’t realize this book was part of a series, but as soon as I found that little piece of information out, I immediately purchased the next book in the series, That Touch of Magic. Before I dove into the second book, however, I figured I’d indulge a little and reread this book first.

And I loved it just as much the millionth time I’ve read it as I did the first time.

Liv is so hilarious, I can’t stand it. In fact, the entire book and all of the relationships are filled with such quirky goodness, I can’t help but just have a freaking blast while reading this book.

The fact that the magic in this book is so stupid, it’s hilarious, is the icing on the cake. See, Liv finds out she has magical abilities, which would be cool and all, except her ability is to turn inanimate objects into various animals. Animals that still look like the object they were made from and are kind of dumb.

Liv’s relationship with Tobias is fun and adorable and fulfilling to a romance junkie like me. But, honestly, the best part of this book is the humor.

I couldn’t pick a better audiobook narrator for this book than Amanda Ronconi. It’s rare that a reader matches the voice of the character so perfectly. And her accents and ability to do different voices is on point.

I definitely swooned over Tobias and Liv!

I mean, considering I’ve reread this an embarrassing amount of times…

It’s already there, friends! Right on the top!

I love me some low-key funny, badass, protective, yet very sweet book BFs!

One thought on “A Little Night Magic by Lucy March”