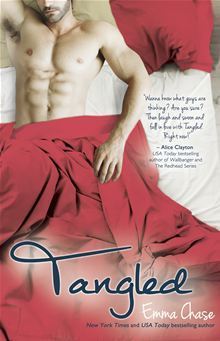 Synopsis:
Drew Evans is a winner. Handsome and arrogant, he makes multimillion dollar business deals and seduces New York’s most beautiful women with just a smile. He has loyal friends and an indulgent family. So why has he been shuttered in his apartment for seven days, miserable and depressed?

He’ll tell you he has the flu.

But we all know that’s not really true.

Katherine Brooks is brilliant, beautiful and ambitious. She refuses to let anything – or anyone – derail her path to success. When Kate is hired as the new associate at Drew’s father’s investment banking firm, every aspect of the dashing playboy’s life is thrown into a tailspin. The professional competition she brings is unnerving, his attraction to her is distracting, his failure to entice her into his bed is exasperating.

Then, just when Drew is on the cusp of having everything he wants, his overblown confidence threatens to ruin it all. Will he be able untangle his feelings of lust and tenderness, frustration and fulfillment? Will he rise to the most important challenge of his life?

Can Drew Evans win at love?

Tangled is not your mother’s romance novel. It is an outrageous, passionate, witty narrative about a man who knows a lot about women…just not as much as he thinks he knows. As he tells his story, Drew learns the one thing he never wanted in life, is the only thing he can’t live without.

Drew is a total a**hole. He was exactly the arrogant, close-minded, self-important jerk that I’ve unfortunately had the displeasure of interacting with both in social and business settings, so to say I did not like his character is a gross understatement.

In fact, the first chunk of this book made me so uncomfortable because of how accurately the author portrayed this kind of man.

That being said… you saw the rating. Now, why would I give 4 stars to a book in which the narrator is so unlikeable? Because… he wasn’t. God help me, I actually found him hilarious after I groaned and rolled my eyes and “ugh-ed” my way through the first few chapters.

First of all, Drew is probably the most unreliable narrator I’ve ever read. This world is 100% seen through the tint of his eyes and absolutely no one else’s. I am so impressed with how well Emma Chase dove into Drew’s psyche to write this book.

On top of that, the way the story is told breaks the “4th wall” … something that, when done well as it was in Kiss, Kiss, Bang, Bang… is one of my favorite things.

It made me want this book turned into a movie so badly.

So… how did I go from cringing with disgust to shaking my head and laughing? Because once I got past the fact the Drew is one of the worst kind of douches, I actually was able to find him just ridiculous enough to laugh at his twisted point of view.

Now, I haven’t read any other reviews for this book, but I’m almost curious to see if other readers were so uncomfortable with being in his head that they found the book problematic. After all, Drew is pretty misogynistic and needs a little lesson on consent. I wanted to shove my fist in his face every time he mentioned how a girl would be saying no, but he “knew” she really meant yes. No means no, douchebag.

All that being said… I didn’t take Drew’s storytelling too seriously. I’m pretty sure that was the author’s intent. I think this was such a really interesting practice in writing from an unreliable narrator’s point of view. Kudos to Emma Chase for taking this on.

Also… I have to say, the entire beginning when Drew is convinced he has the flu… probably one of my favorite things. I love ridiculous dramatic people (like Howl in Howl’s Moving Castle).

SebYo BIATCHES!! He’s one of my favs! That deep, growling voice is just… sigh…

I’m sorry, I just couldn’t muster any butterflies for this story. I did not see what Katherine saw in him AT ALL.

Not unless I love the rest of the series.

Drew is the worst. He is absolutely not book boyfriend material, however, I would love to be his close friend… just so that I could roll my eyes and laugh at him endlessly.