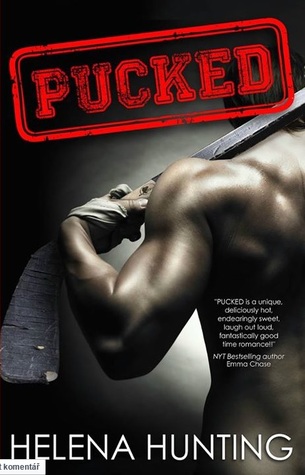 With a famous NHL player for a step-brother, Violet Hall is well acquainted with the playboy reputation many hockey stars come with. She’s smart enough to steer clear of those hot, well-built boys with unparalleled stamina. That is until she meets the legendary team captain—Alex Waters.

Violet isn’t interested in his pretty, beat-up face, or his rock-hard six-pack abs. But when Alex inadvertently obliterates Violet’s previous misapprehension regarding the inferior intellect of hockey players, he becomes more than just a hot body with a face to match.

In what can only be considered a complete lapse in judgment, Violet finds out just how good Alex is with the hockey stick in his pants. But what starts out as a one-night stand, quickly turns into something more. Post-night of orgasmic magic, Alex starts to call, and text, and e-mail and send extravagant—and quirky—gifts, making him difficult to ignore, and even more difficult not to like.

The problem is, the media portrays Alex as a total player, and Violet doesn’t want to be part of the game.

I was not expecting to love this novel as much as I do. That’s right. LOVE, not like or enjoy or be entertained by. Pucked had so many of the elements I adore in a good book: great characters, laugh out loud moments, cringey moments, and tons of butterflies.

I adored Violet’s quirks and how straight up weird she could be. Her character was over the top, but believable. And I’ve never read a character quite like Alex before. He managed to be dorky and charismatic, a badass and a softy all at once and effortlessly. Both characters were unique, but believable, something that is not always easily pulled off.

The storyline wasn’t anything particularly unique or anything, however, given the characters, it didn’t even matter. I seriously laughed out loud during several scenes and swooned during several more.

I’m so excited about my discovery of this series and this author!

This was a dual narration.

I don’t think I’ve ever heard Muffy Newtown narrate before, but she’s absolutely fantastic. She was able to capture Violet’s quirks wonderfully.

As for Nathan Everett, while I didn’t have any issue with his performance, his Canadian accent was a little much for me. I get that Alex is Canadian, but it was almost distracting sometimes.

PS – this and the next three books in this series are free with the audible romance package!

So many butterflies! There are several parts in this book that took my breath away with the amount of butterflies I had swarming around in my belly, and that typically isn’t the case when it comes to hilarious books.

Yes! In fact, I’ve already re-read parts of it lol!

I definitely need these books for my bookshelf display!

Alex is absolutely adorkable yet a total jock. I love everything about him.