The Princess Game: A Reimagining of Sleeping Beauty (The Four Kingdoms Book 4) by Melanie Cellier 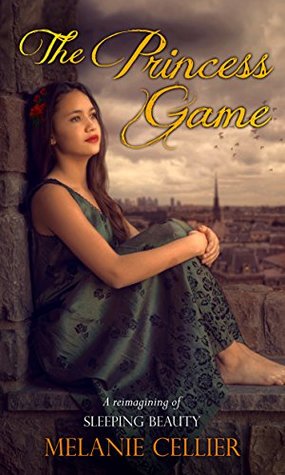 They call her the Sleeping Princess, but Celeste is far from asleep…

Celeste has been cursed since her sixteenth birthday–just not in the way the rest of the kingdom thinks. All they see is her breath-taking beauty, marred by her foolishness. Only she knows that she retains her brilliant mind. And it’s a secret she must keep at all costs.

Over the years she’s grown accustomed to the necessary deception. After all, her life depends on it. And she’s even found a way to protect her kingdom, working from the shadows. But now a dangerous new threat has emerged, one that Celeste can’t defeat alone. She needs the help of a newly-arrived prince. One who’s altogether too handsome and too charming. Somehow she needs to keep her secret, save her kingdom and find a way to free herself from the curse. The last thing she has time to do is sleep.

In this reimagining of the classic fairy tale, Sleeping Beauty, it’s only the princess’ mind that is asleep. And sometimes appearances can be deceiving.

The Princess Game is the last book in The Four Kingdoms series, and let me tell you how pleased I am! I thought the whole series was so intriguing and so creative! This book is my favorite out of the whole series.

When Princess Celeste gets cursed by her aunt after given the gift of beauty and intelligence from two godmothers her whole world changes only a few days after her birth. The innocent baby is sentenced to death on her sixteenth birthday. But when a third godmother steps in she declares that at the age of sixteen, Celeste will not die, but will sleep until true love awakens her. But with the outrage of her father the King, and the Duchess of Sessily suggestion, the godmother gave her gift to the innocent princess: instead of death, only will her mind sleep.

No one knows what actually happened to Celeste. The curse forces her to act like her mind is sleeping, but inside, Celeste is the same and must protect the kingdom. Things get hard though with the curse preventing her.

This book was so intense and intriguing with a great twist on the story!
This is a wonderful series that I enjoyed reading, if you like re-telling of fairy tales with a little bit of romance, you will definitely like this series!

William truly loves Celeste for who she is and not all because of her beauty. He even is willing to sacrifice himself for her.

The book did give me some butterflies! The story also produced emotion which was well written.