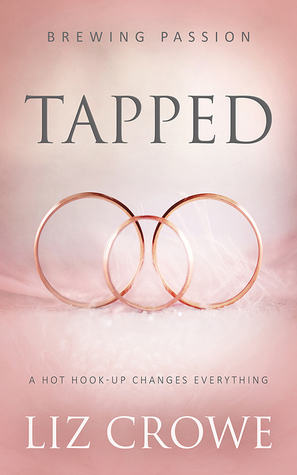 For Austin, it’s a life-altering moment that sets him on a path away from his birthright, while Evelyn must face her fears about committing to a man considered the playboy of the micro-brewing world.

But three strong personalities don’t always make for the best emotional mix and when a simple misunderstanding causes chaos, it’s up to Ross to repair the tattered shreds of their relationship.

I’m going to preface this review by saying that the first two words out of my mouth when I finished this novel were, “Stop. No.” And I said those two words a lot as I read this novel.

I wanted to like this novel. The synopsis was intriguing. I loved that it took place in the brewery world, and I like the playboy-turned-loyal-lover thing, but oh my goodness this book was just a hot mess.

There were too many over-the-top cheesy lines and cringe-worthy (not in the good way) moments. The timeline kept skipping forward and I felt like there were so many gaps in the story.

However, I did power through and finish this book. Which is saying something because I’ve shared how many books I have on my To Be Read list! My reading time is very valuable to me. So, that’s something.

For the first half of the book, I was powering through because I was hoping that it would get better. The second half of the book actually started grabbing my attention, but just when I thought there would be some redemption, there would be another eye-roll worthy scenario or a huge chunk of seemingly important information skipped over… or some other equally frustrating deal breaker.

I think Ross (Hero #1) was the best part of this story. He is the whole reason for that second star. Evelyn’s character, the Heroine, didn’t seem to be developed very well at all… and neither did Austin (Hero #1). Or maybe I just didn’t connect with them? I’m not sure, but I never got a great handle on their personalities because they kept acting out of character. Ross was the only one who seemed to be a somewhat solid, charming character.

This storyline had promise and I really feel like if this book had a little more time dedicated to it, some better character-building, and the plot holes filled in, this could have been a really great book. As it currently is, though, is just messy. A hot mess. (And I mean that both ways, because there were some decent steamy scenes, but even some of those jumped around too much.)

Anyway, I’m so disappointed that another ARC let me down. I always feel bad, but I did receive this in exchange for an HONEST review, and this is exactly that.

This had the potential to give me some serious butterflies, but it fell flat.

It was hard enough getting through it the first time, unfortunately.

I’m afraid I can’t use up precious bookshelf space for this one.

Honestly? Despite not liking this book, Ross could almost be book boyfriend potential if the story was better and all the characters were more developed.

Grab a Copy of Tapped by Liz Crowe